The delineated jew in the shtetl

The religious life of the delineated jew

Socio-Cultural Association of Jews in Poland

Jan 15 - Mar 8, 2009 Warsaw
This series comprises wood engravings, presenting Jewish life and Jewish people, during the period when Jews were the third largest nation in the region. In the second half of the 19th century only the Poles and Ukrainians were more numerous than the Jews – there were one-third fewer Czechs and Slovaks combined, and three times fewer Serbs. Poland under the partitions was the second largest agglomeration of Jews in the world. Jewish prayer houses and Jewish schools, mykvaot and cemeteries, and – naturally – Jewish homes had stood here for centuries. And Jewish homes were located predominantly in small towns, less often in cities, and least often in the countryside. The 19th-century Jewish-themed wood engravings, made by some of Poland’s most prominent graphic artists, published in Polish illustrated journals, while perhaps not spelling out these facts precisely, certainly testify to them, or illustrate them. The creators of the images include some of the most renowned Polish artists of the era: Andriolli, Brandt, Chełmoński, Fałat, the Gierymski brothers, Gerson, Gottlieb, Grottger, Kossak (father and son), Kostrzewski, Matejko, the Pillati brothers, Rodakowski, Siemiradzki, Wierusz-Kowalski, Witkiewicz, and others.

Old Houses in Przysucha (Opoczno Region) wood engraving based on a drawing from nature by Apoloniusz Kędzierski anonymous engraver, Warsaw 1880 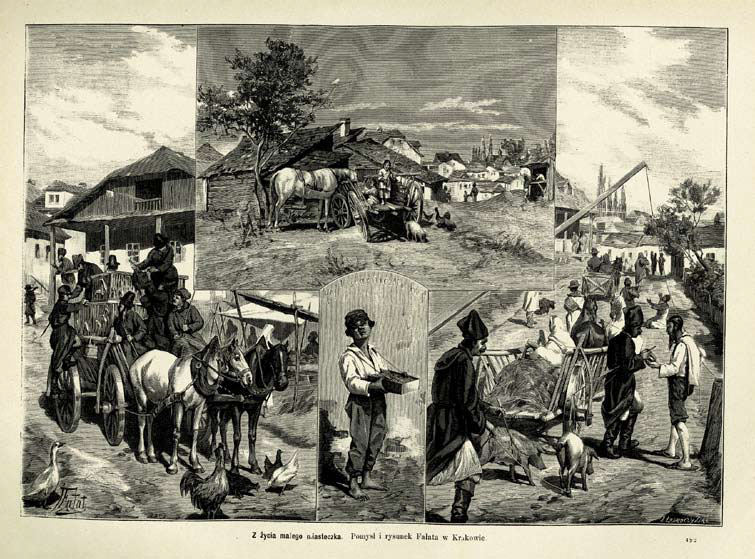 Life in a Small Town ↑ wood engraving based on an image by Julian Fałat engraved by Józef Łoskoczyński, Warsaw 1880

Market Fair in Łowicz → engraving based on a drawing by A. Wierusz-Kowalski engraved by E. K. Nicz, Warsaw 1877

This exhibition series was one of the first to be presented by the Żyd Niemalowany team in 2007-2014 and has so far been shown in six places. In the museum-synagogue in Tykocin (exhibition No. 13, 2008). Subsequently, in the same year, it traveled to a High School in Skwierzyna (exhibition No. 17, 2008/2009); the exhibition was part of a ceremony where the school was named after Irena Sender, recipient of the title of the Righteous Among the Nations. Then it went to the Royal Castle in Szczecin (exhibition No. 28, 2009/2010) and to another synagogue- museum in Włodawa (exhibition No. 42, 2011): the opening took part during the 13th Annual Festival of Three Cultures. No two exhibits were exactly alike.
Share